Where do I start.

Chris and I got to the track about noon on Friday to help set up Airfence, cones, etc, etc. Mom and Dad came down to watch Chris race. They showed up at the track about 5:00pm while Chris and I were working. I had thoughts about letting dad ride the 650 in Test the Track but instead he just did a lap around the track while we were working. He hadn’t been on a bike in about 40 years but I think he had a good time. He said he wanted to “open it up”.

Saturday morning Chris and I got to the track around 6:30 and set up our pit, got the bikes teched, etc. Dozer Dave and another buddy Jason showed up and set up their pits next to us. We did a few practice sessions and then it was my race time. I got around turn 1 in 3rd behind Justin on the Ducati. I had a hard time getting around Justin and Dre checked out (as usual). I finally got around Justin and was running in 2nd from then on. I didn’t know how far ahead I was from 3rd so I just kept on the gas as hard as I was comfortable with and from what I understand I was pretty much out there by myself in 2nd place the rest of the race. Made a couple of improvements with my first 2nd place podium finish and my fastest lap times ever in the 1:10.5s. My goal for the weekend was to get into the 1:09s so I felt good with the 10.5s and felt I could get the other .5 seconds on Sunday. It was so awesome having not only my CCDR and STLAR buddies out there but mom, dad, Michelle and Kelly were in attendance for the first time! That 2nd place finish put me in 1st place in Amateur GT. I didn’t ride any more after my race because I am old and fat and out of shape.

Fast forward to 5:00pm and it’s Chris’s turn. He’s riding for the championship in his class. We get Chris off the stands and then we all up in the new tower with A/C and more windows to watch Chris’s race. Chris lined up in a pack of around 10 Sportsman class racers, easily the biggest grid of the year. Chris got a bad start and two new guys (couple of brothers who race supercross) fresh out of the race clinic along with the other Chris on the 929 who he had a big battle with in the previous race got around turn 1 ahead of him. There was an awesome battle between the 4 of them for almost half of the 8 lap race. Chris finally picked his way through the pack around lap 5 and then got a pretty good gap on them. The other Chris on the 929 got through too but Chris had a good gap on him. He held the gap for the last 3 laps to take the win. Extremely exciting race for everyone, especially the family! With the win Chris locked up the Championship in Sportsman.

Sunday we woke up to rain. Lovely!

So Chris and I got to the track around 7am and get things set up. I pulled my wheels off and mounted up my Michelin rain race tires and went out on them for the first time in the 2nd session (sat out session 1). It was raining while we were out there but I really liked the feel of the tires. Went out again in the 3rd session and it was still raining and I ended up with the fastest lap by a good 3 seconds over anyone else there. So now I’m feeling really good.

The rain stopped not long before my race start but they declared it a rain race so I left the rain tires on and headed on out for the parade lap. I lined up next to Dre who is catching up quickly in the points and we gave each other the thumbs up. They drop the green and Jeff Selbert (Expert Class) gets round turn 1 in 1st, Dave Lacavich (also Expert) gets around turn 1 in 2nd, Andre Taylor in 3rd, and I’m in 4th overall. I think Dave was on DOTs because normally he would have checked out with Selbert and Dre by this time because Dre and I passed him in the first couple of turns and we both got right up on Selbert.

I was thinking “Holy crap, what the heck am I doing up here with Selbert and Dre?!?”. For reasons unknown I was able to stick with them for half the race and I even had stupid thoughts of possibly passing one of them as they were passing each other back and forth for the time I was behind them. I decided to back off a little after getting a bit tired and having a pretty good slip on the rear around turn 2. I knew that if I could finish in 2nd place in these last 3 races I would lock up the championship by 3 points, assuming Dre takes 1st every race. That, and I’m old, fat, and out of shape.

I ended up finishing my race in 2nd behind Dre and I believe Dre and Jeff were very close crossing the finish line for the overall. So, I just need to pull two more 2nd place finishes to win the Amateur GT class. I think that’s a tall task but I’ll give it what I have…..

Chris didn’t ride all morning because of the rain but he rode all 3 practice sessions in the afternoon. He lined up in the front row for his race and he ended up jumping the start. As soon as I saw it I knew he was getting the meatball flag for a penalty. Even with the jump start he ended up getting around turn 1 in 3rd. Before they got his number up on the board he had moved up to 2nd and was gaining on 1st. Then he saw the meatball flag and his number on the board and pulled into hot pit for his stop and go. He got back out on the track around 5th and around lap 5 he caught the 2nd and 3rd place guys and was setting up the 3rd place guy in 5 and ended up running into him. He did get around him but let the guy back around because he felt bad about bumping him. He finished the race in 4th but I think he learned a lot that race and kept the rubber side down so I was really happy with the race.

Thanks to everyone who came out to watch both Saturday and Sunday! Had a great time!!

Saturday Podium after the race with the family: 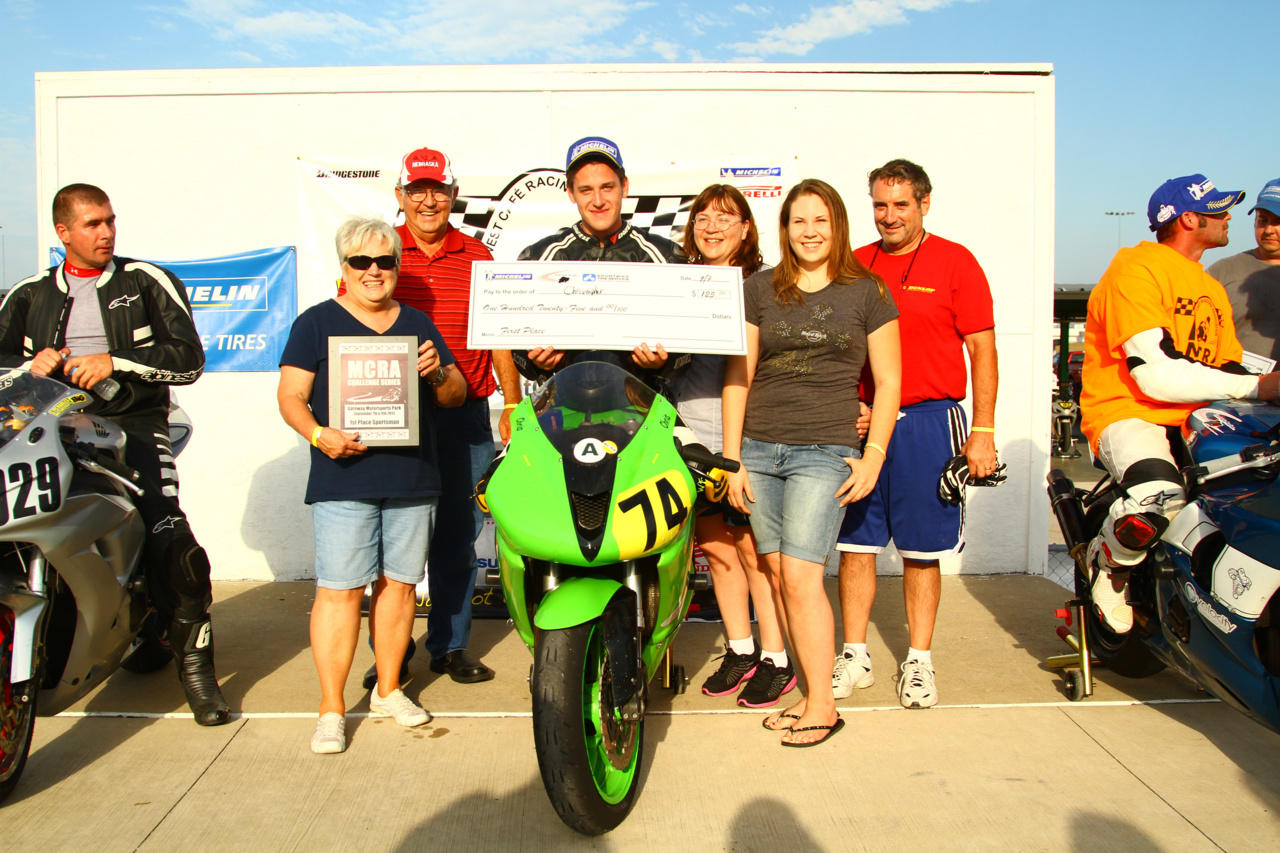 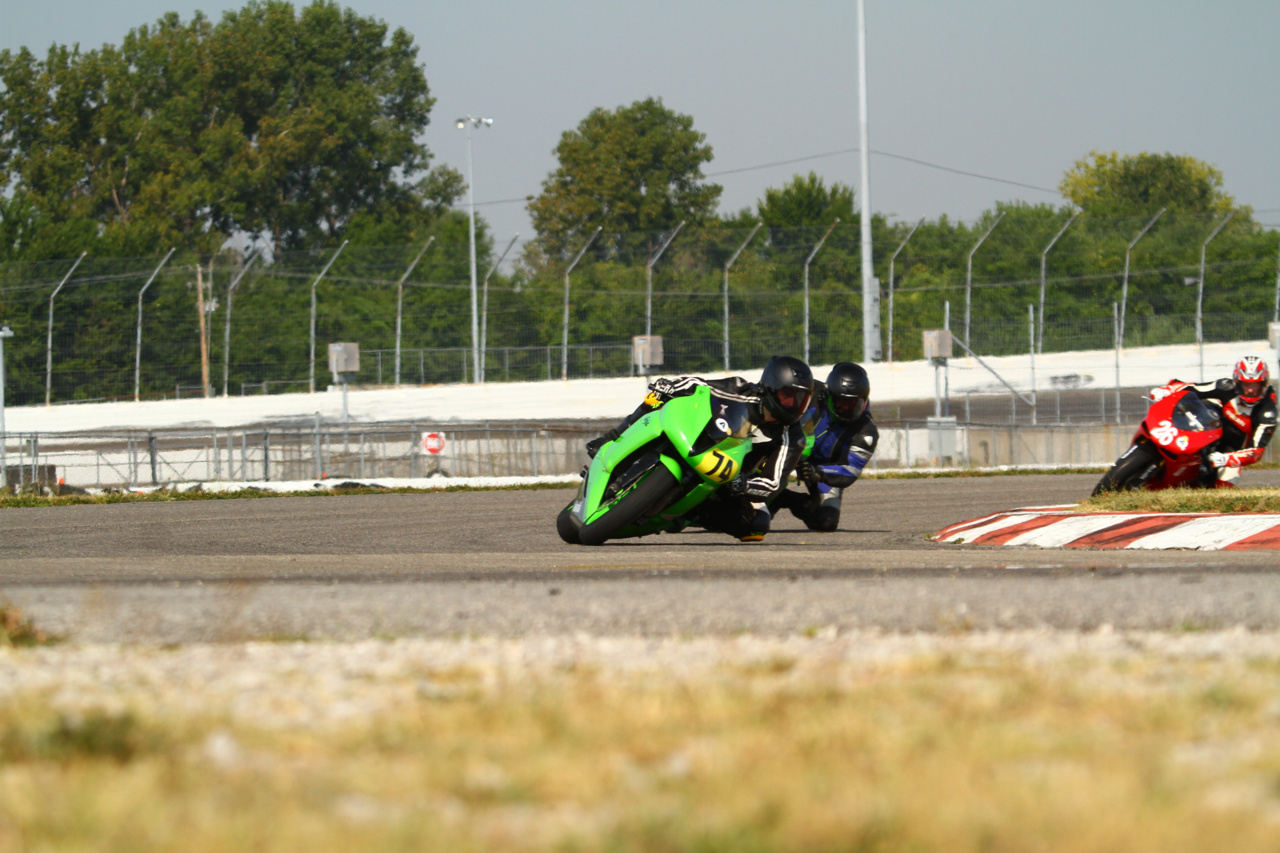 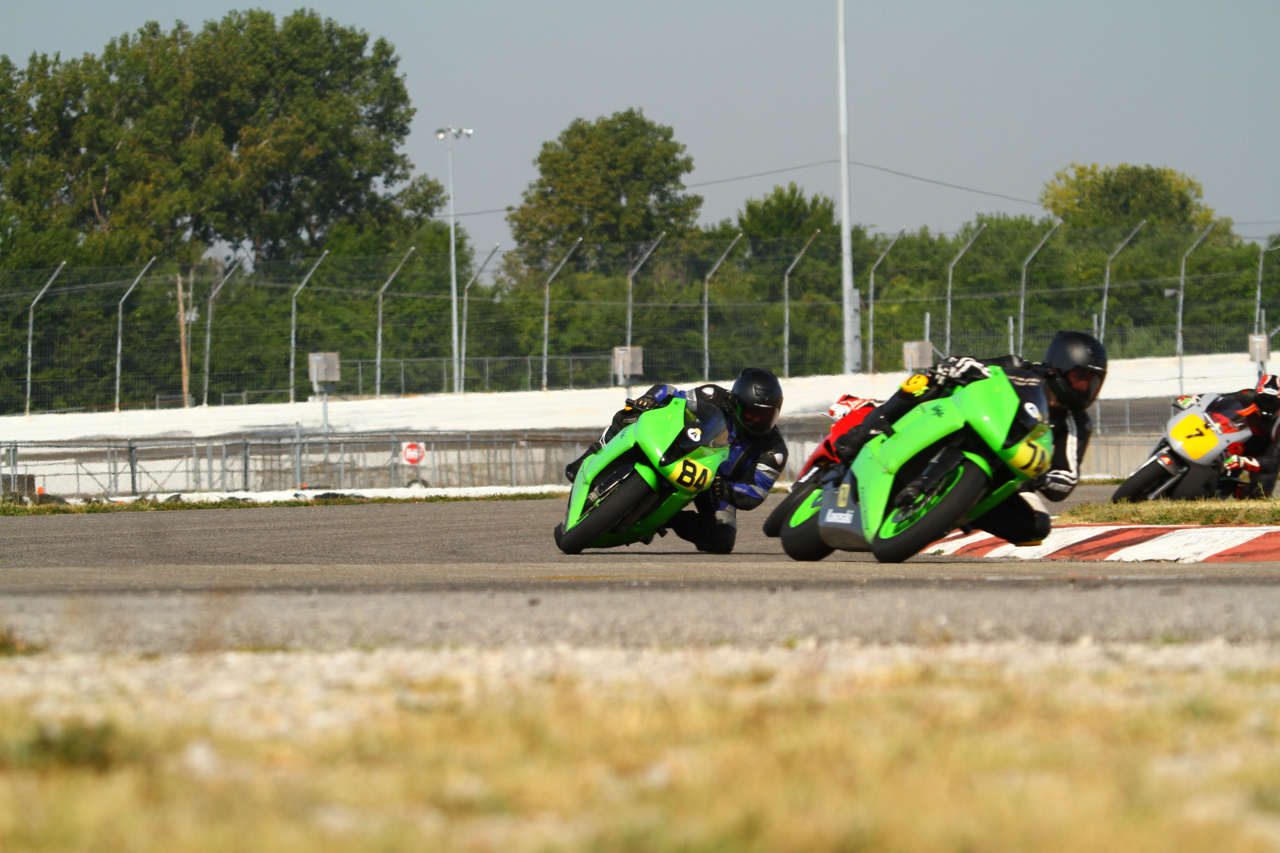 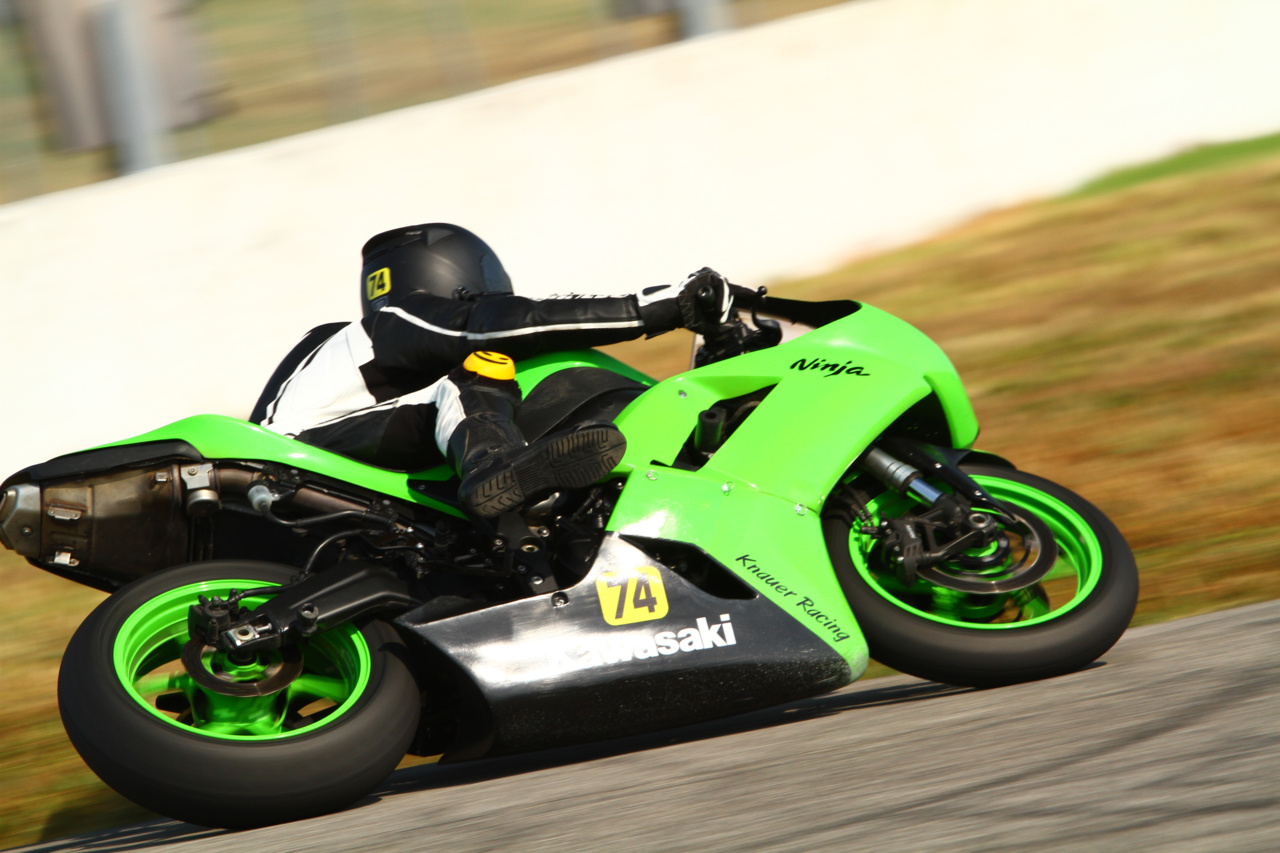 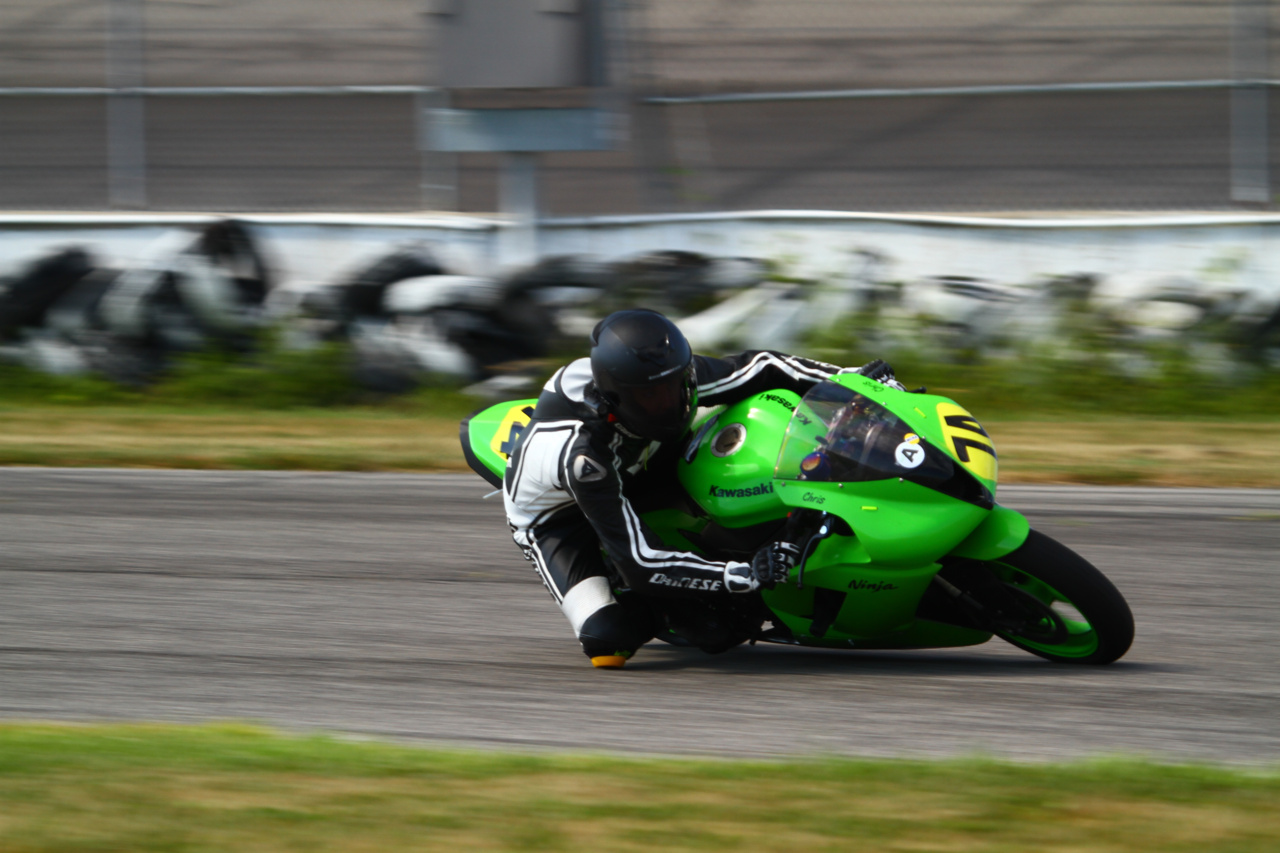 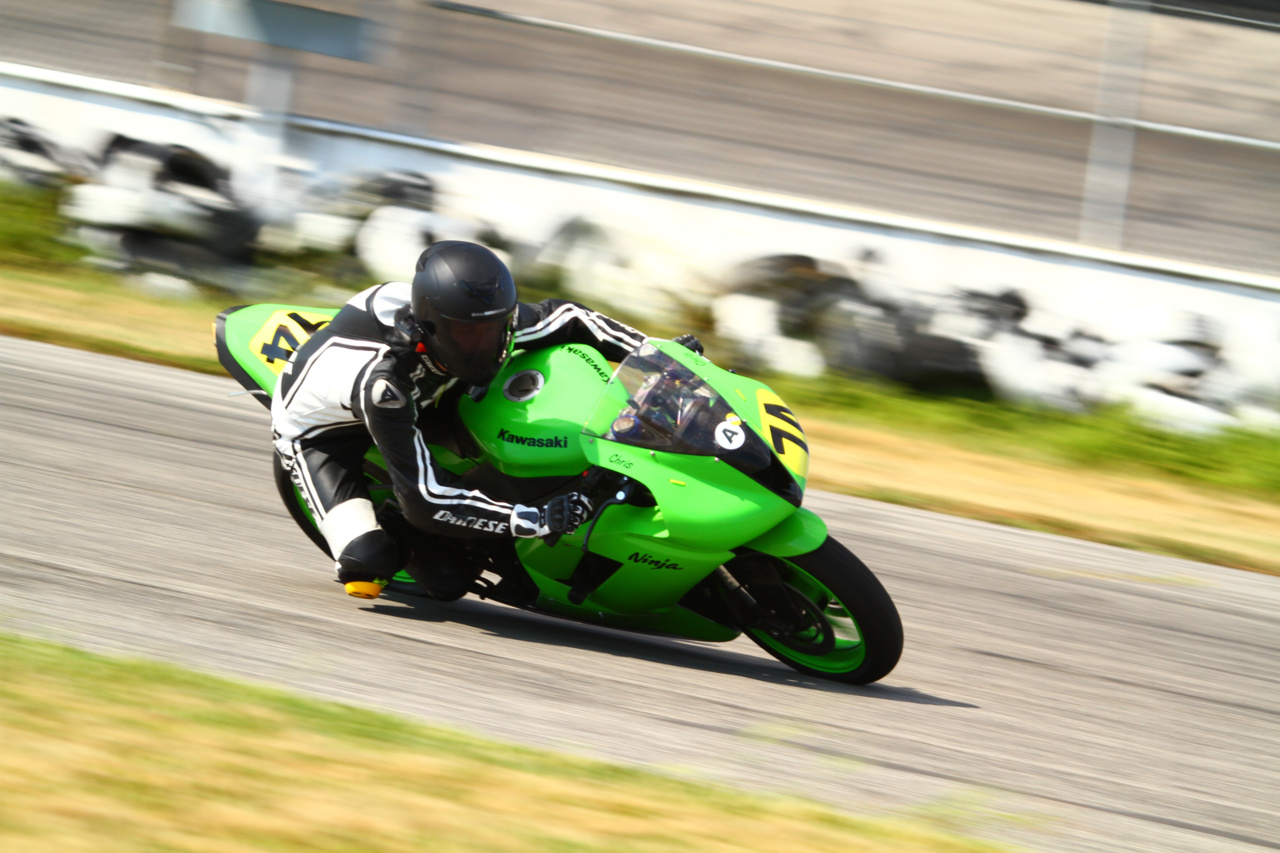 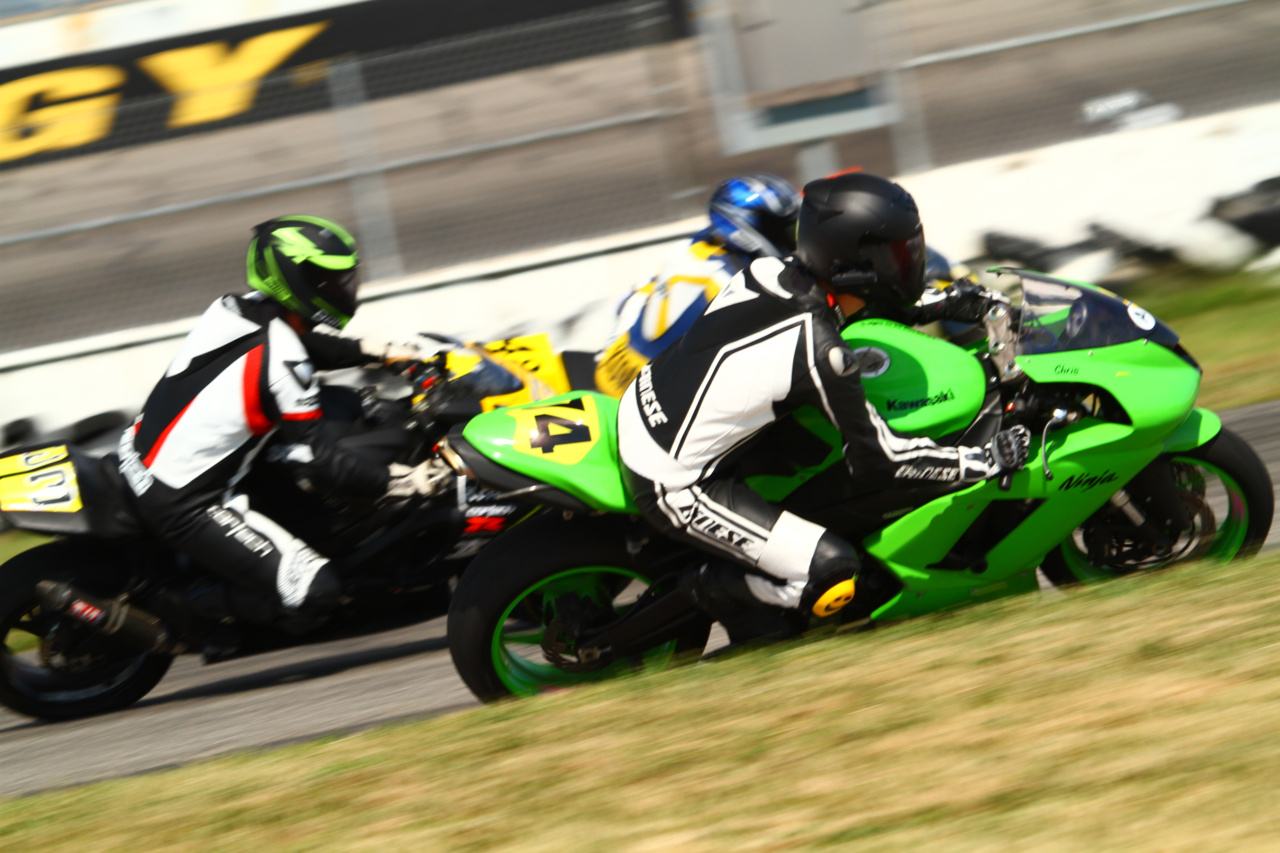 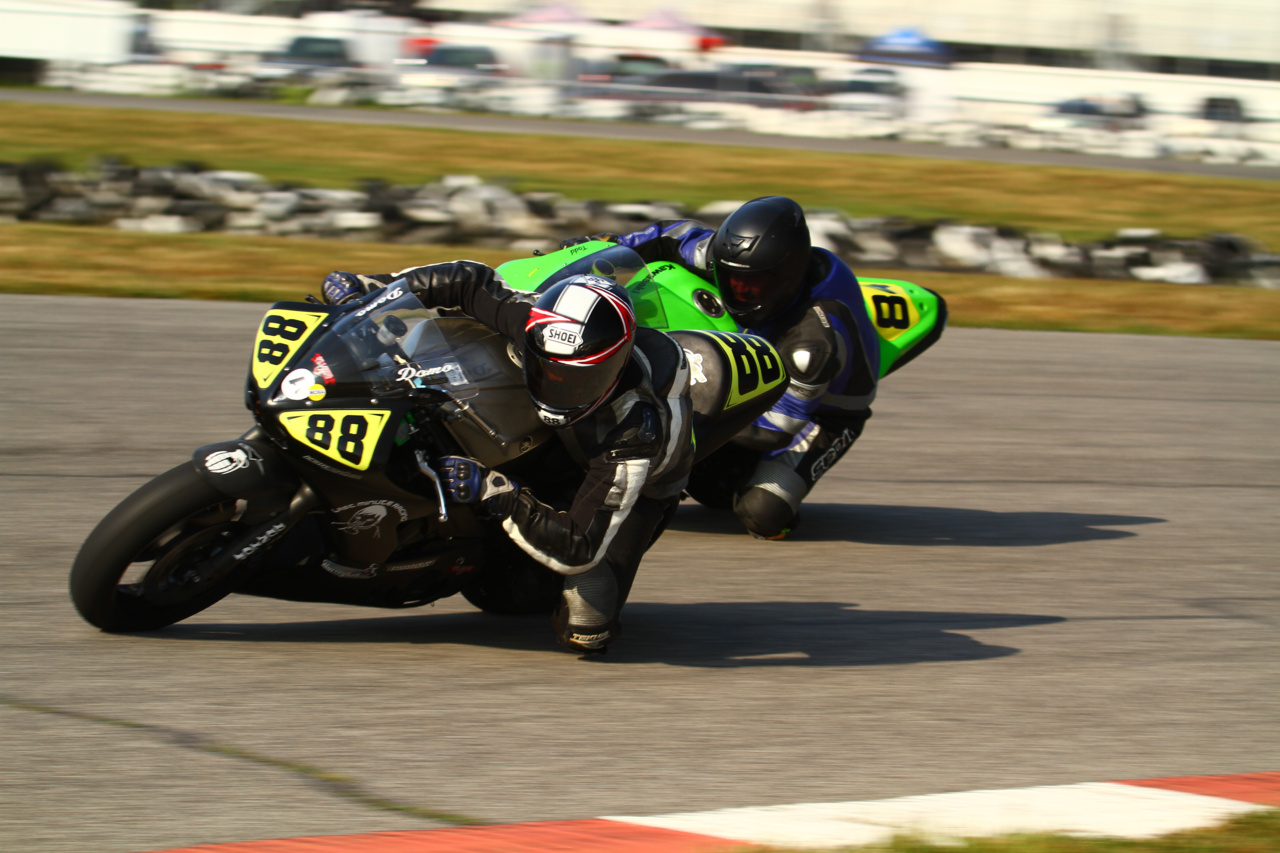 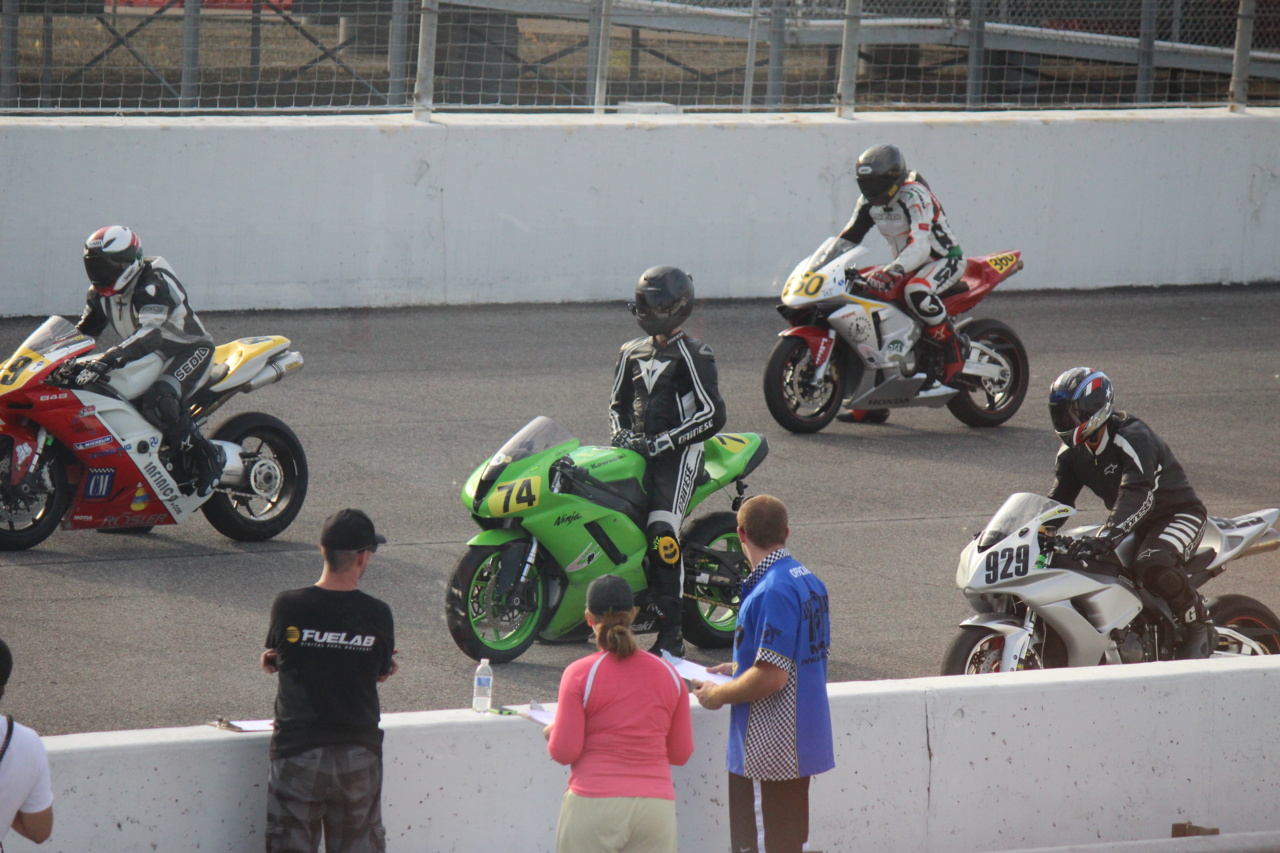 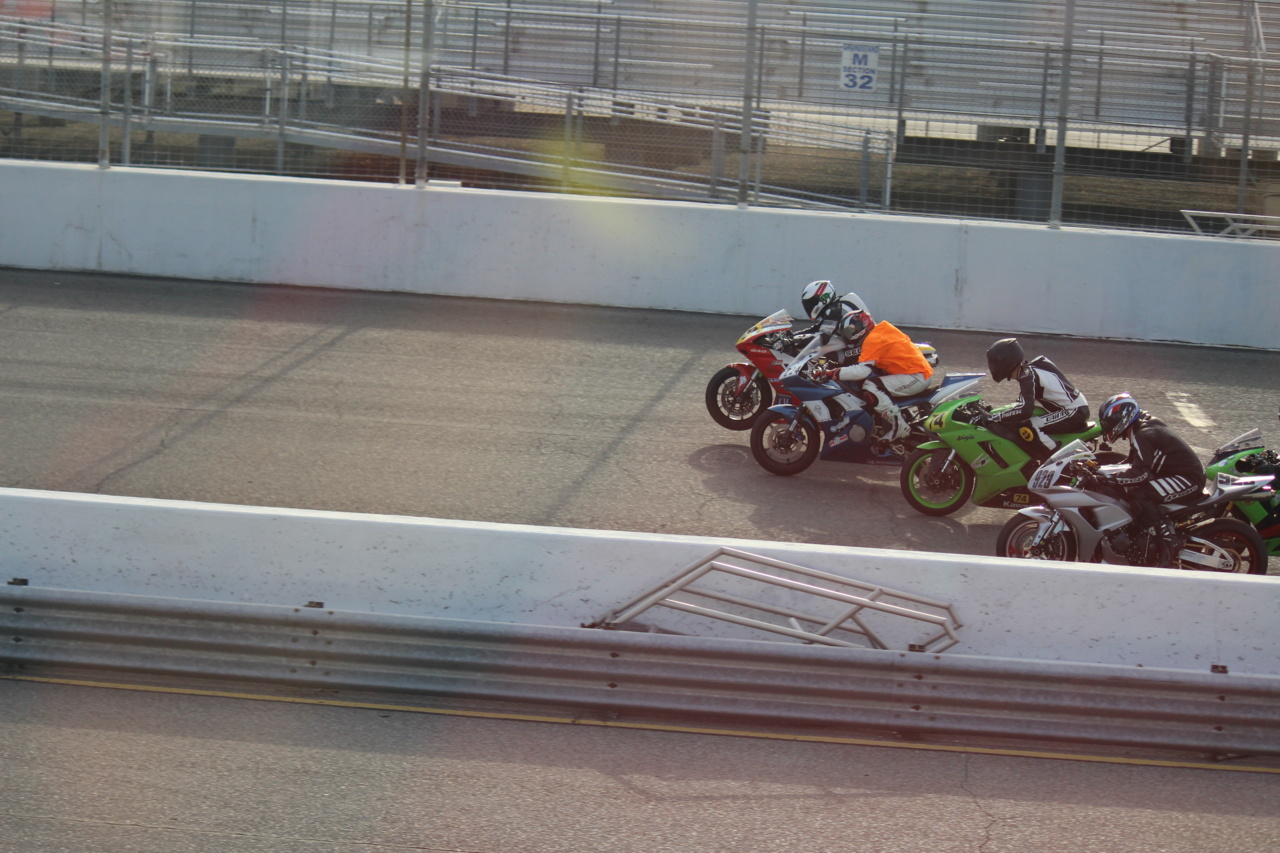 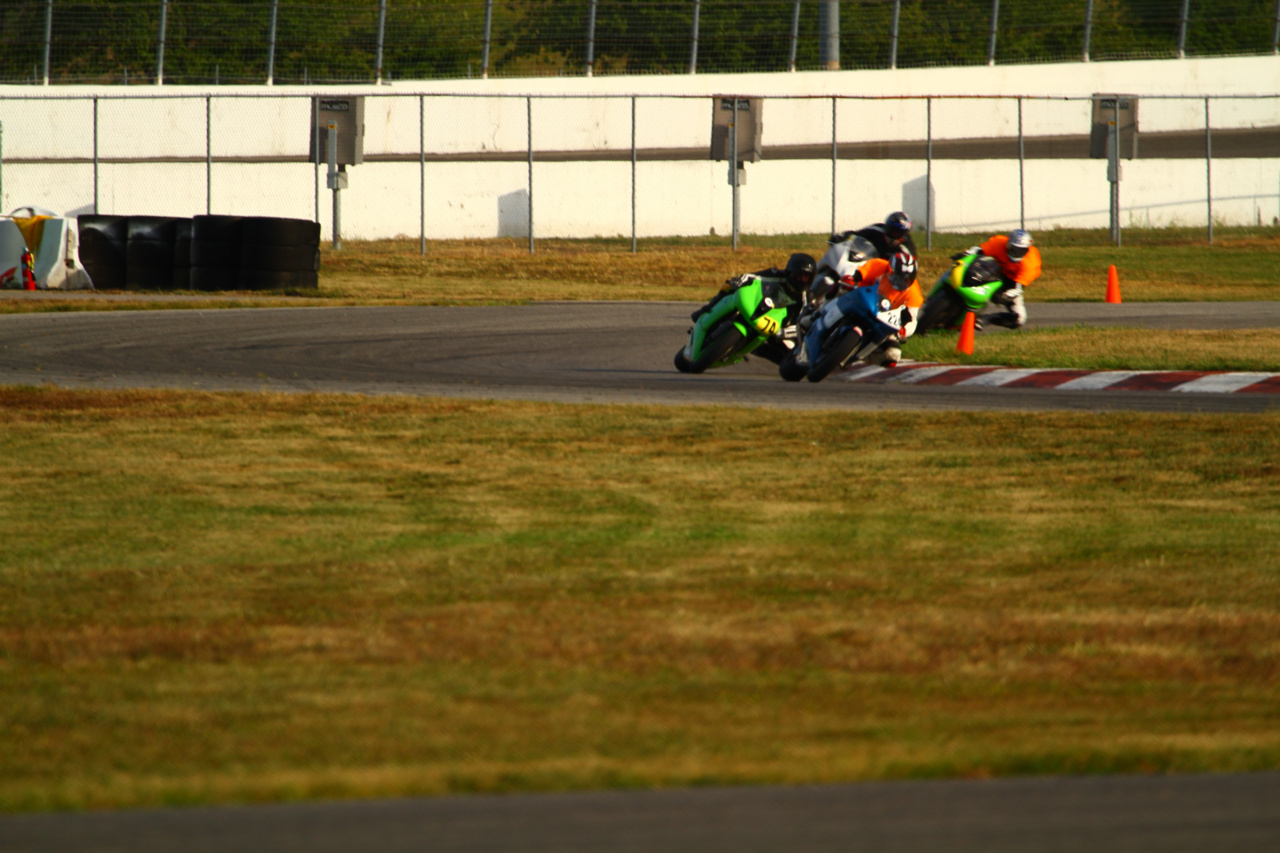 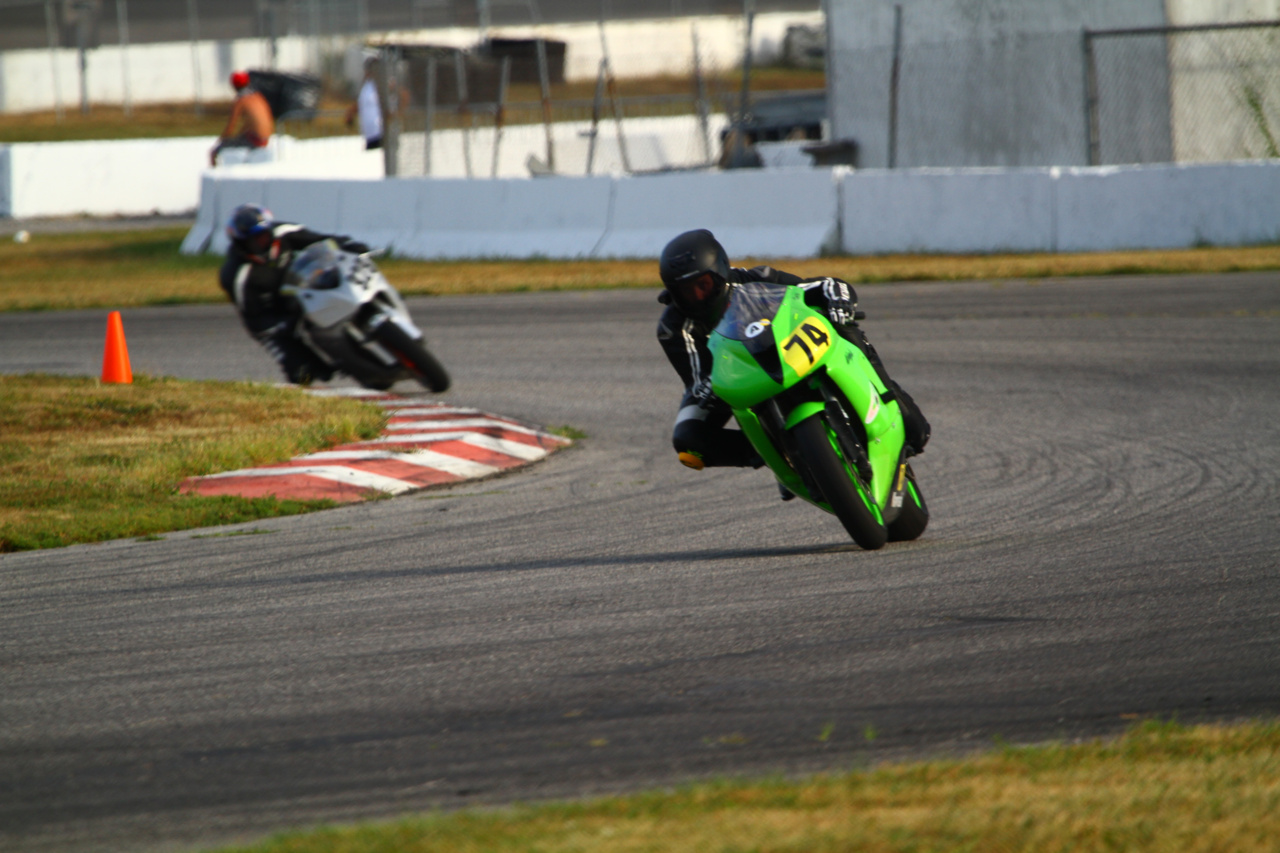 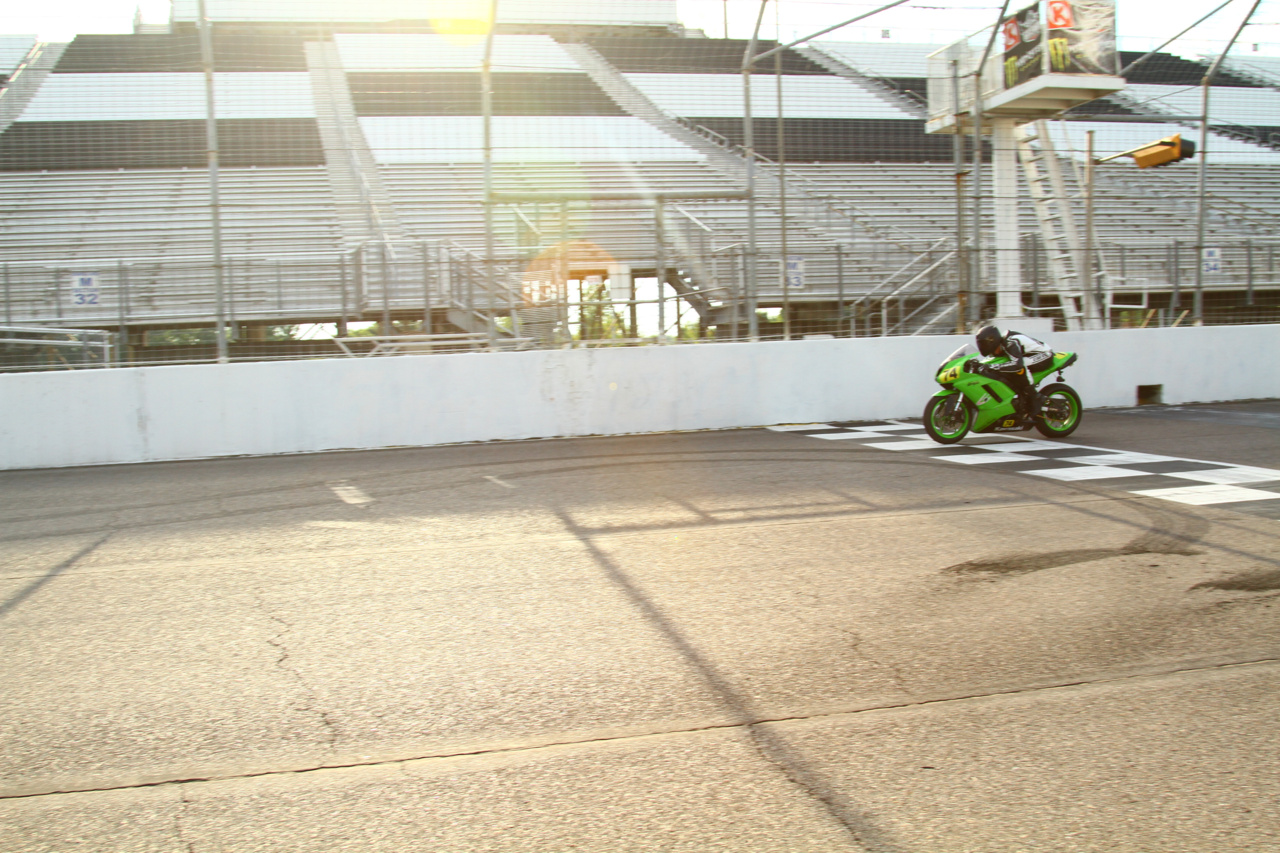 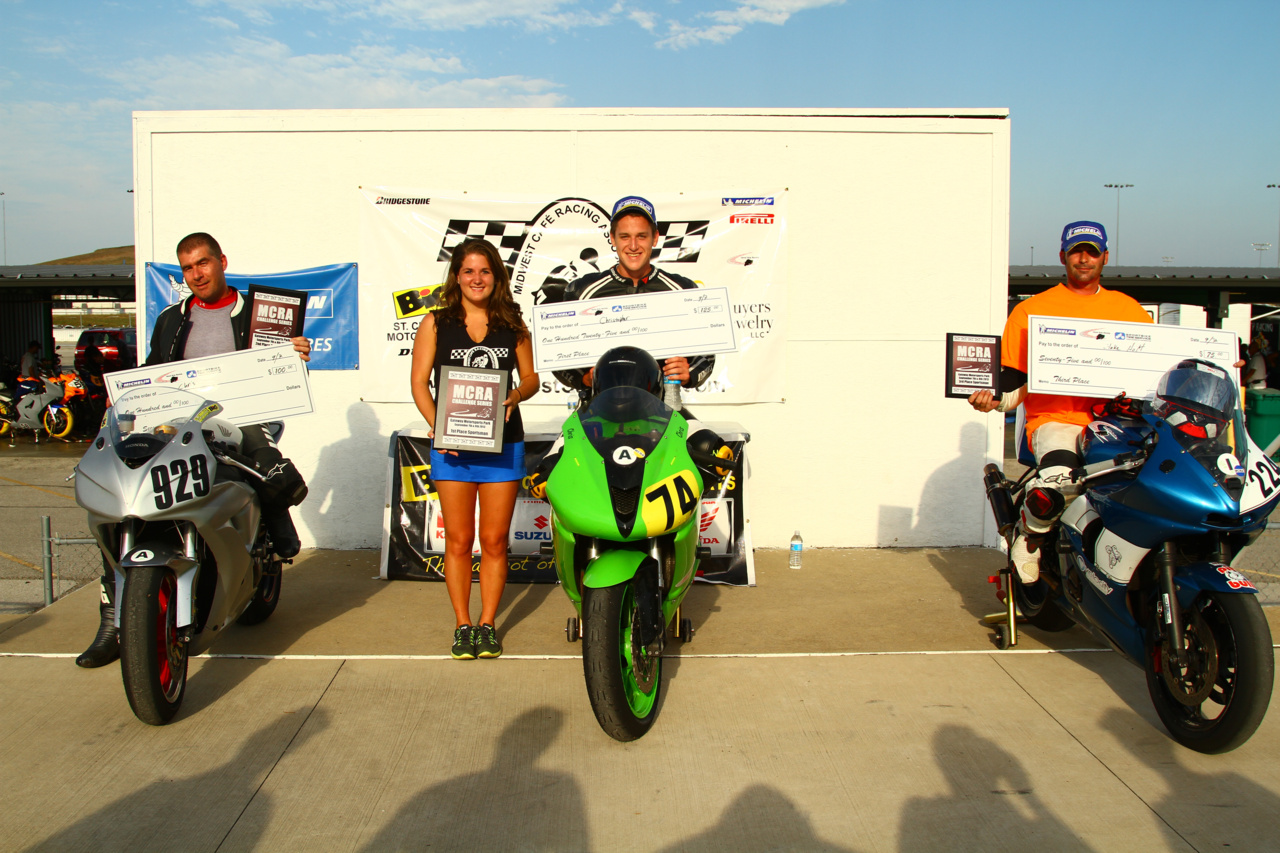 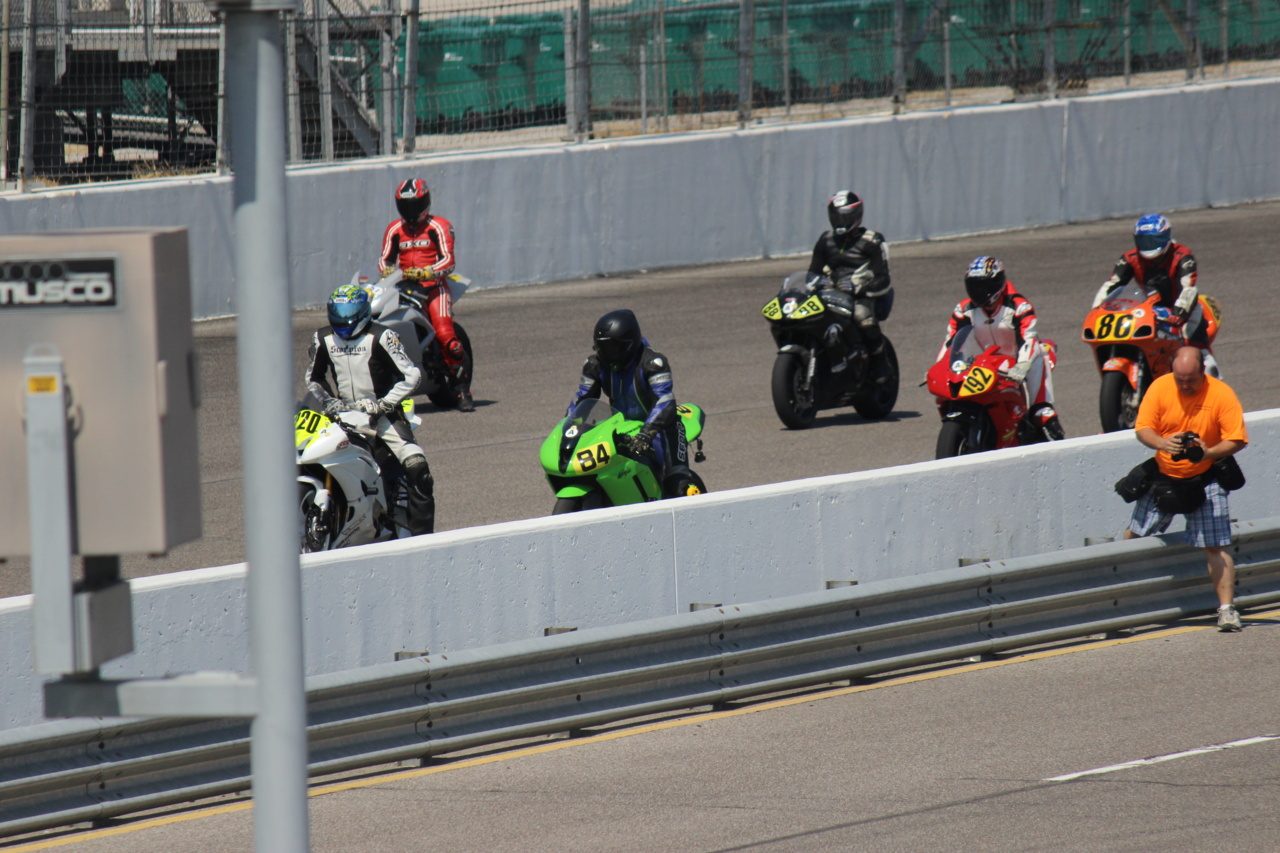 Dragging knee in the rain: 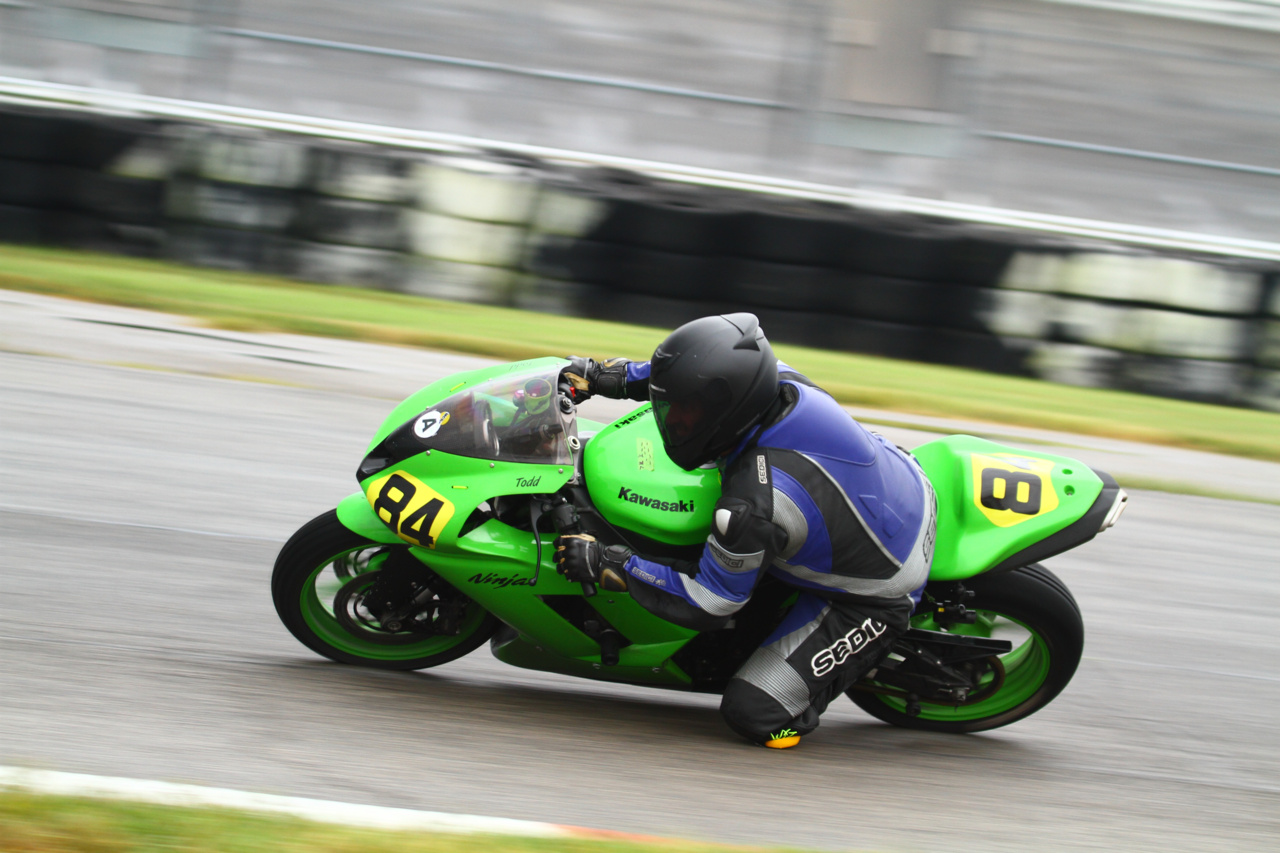 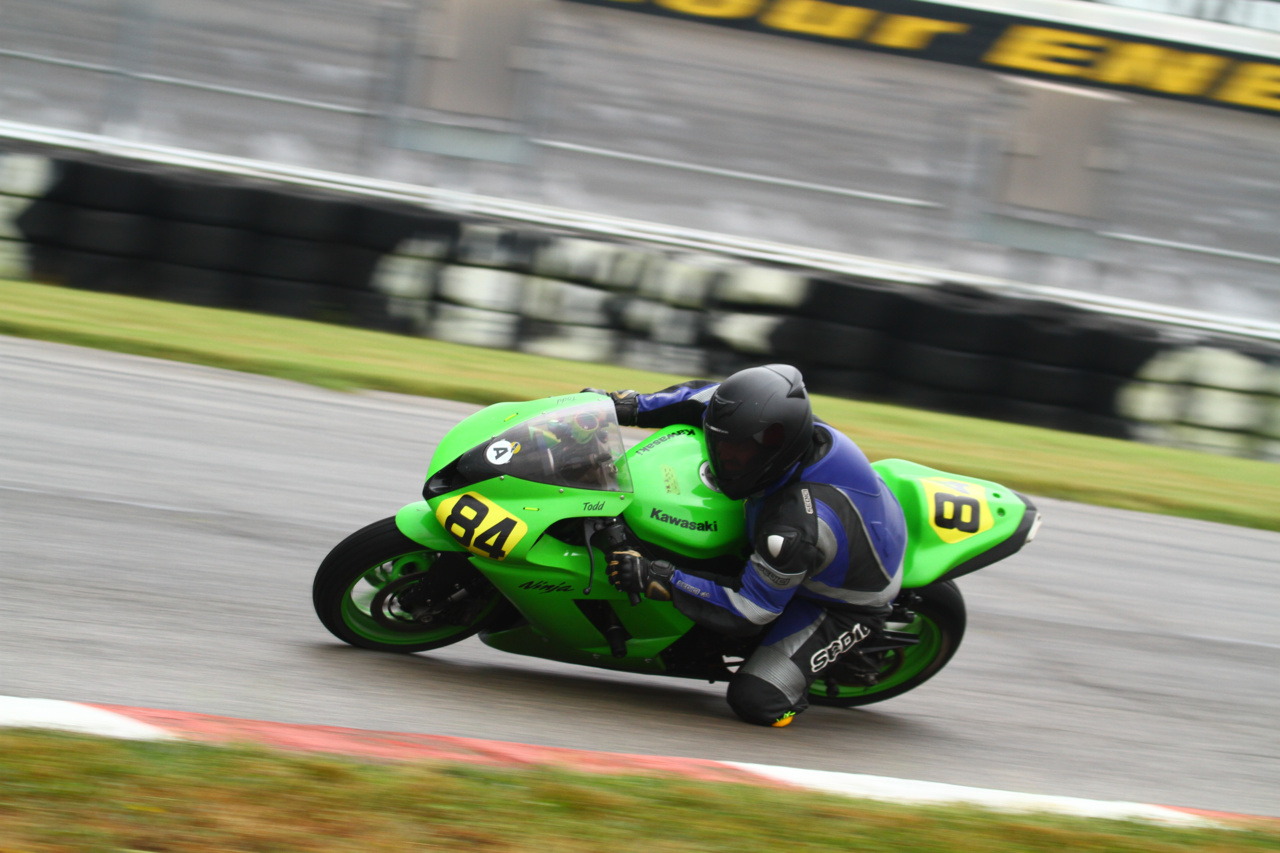 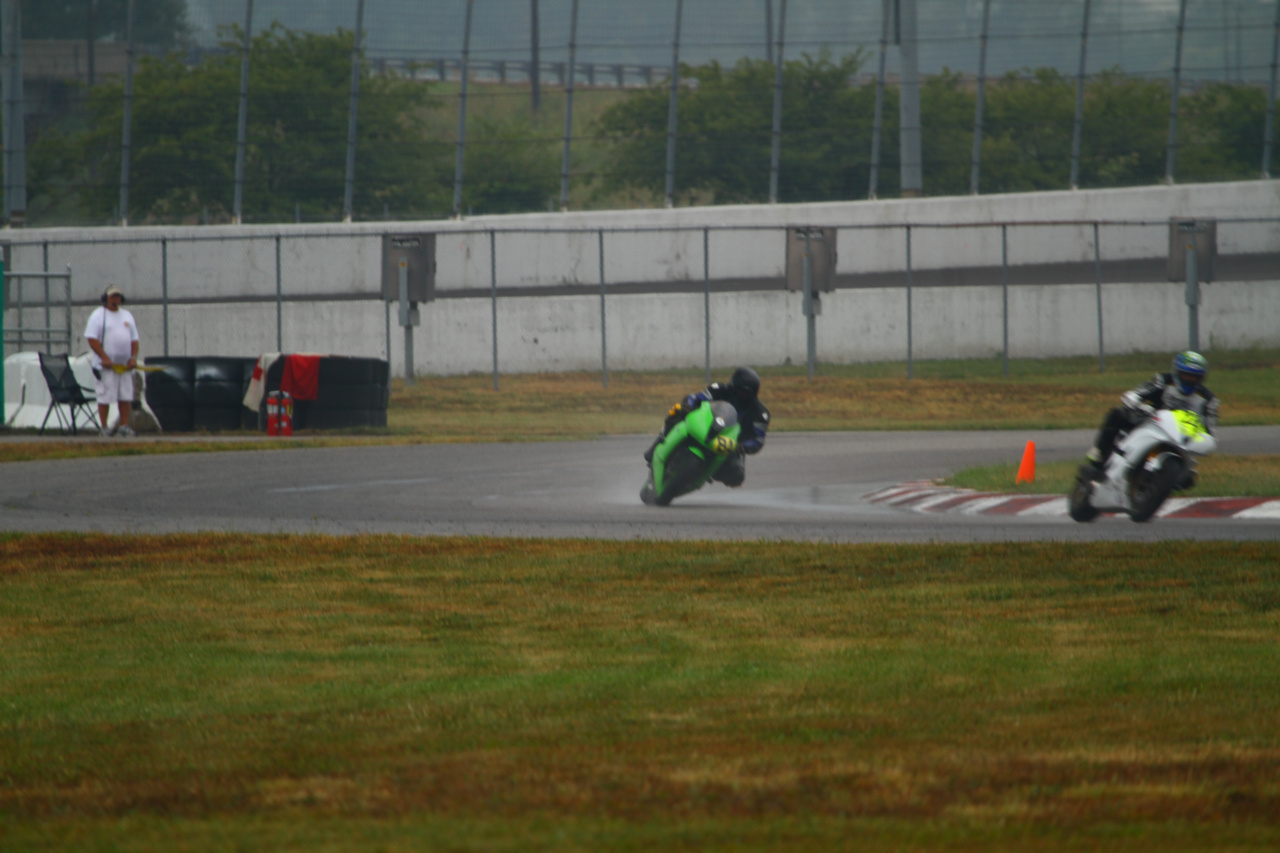 Taunting Will as I go by him on the white flag lap: 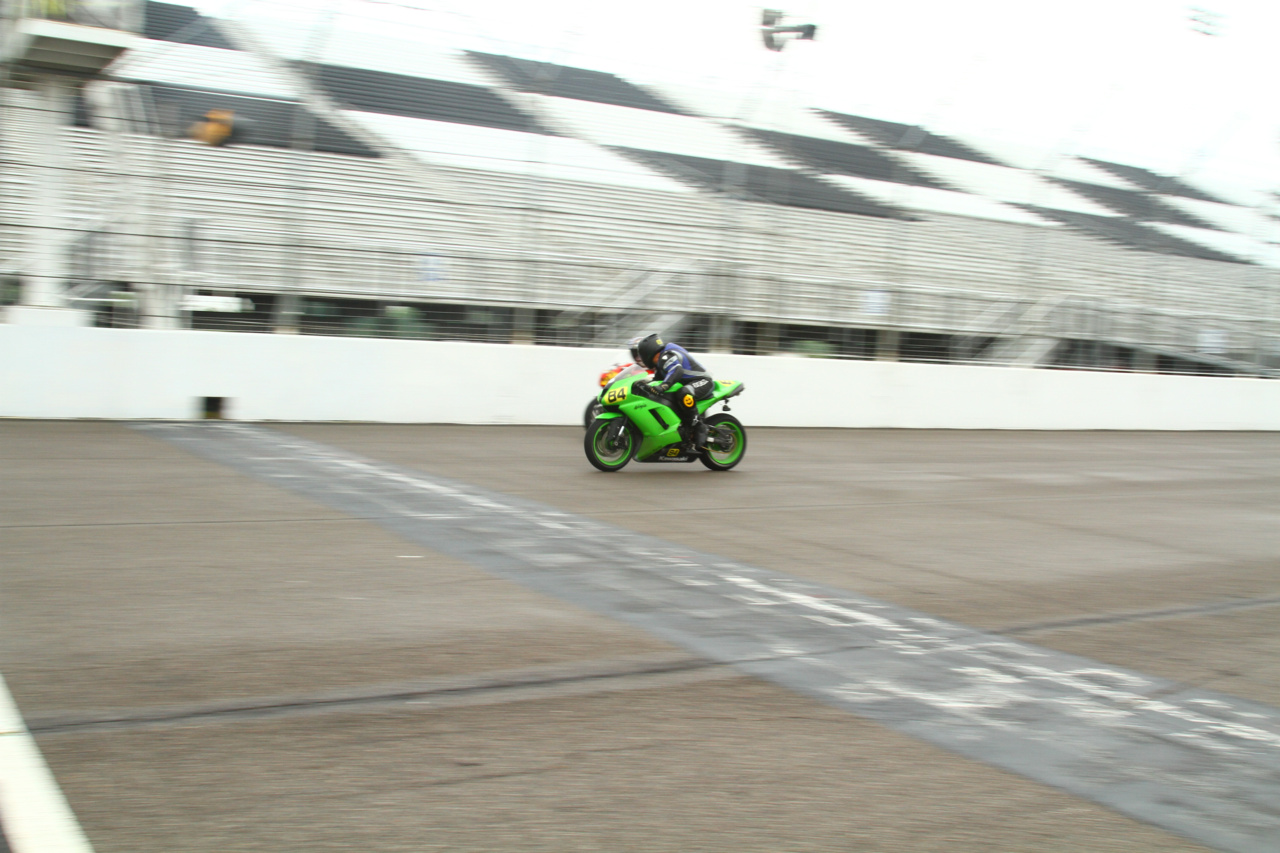 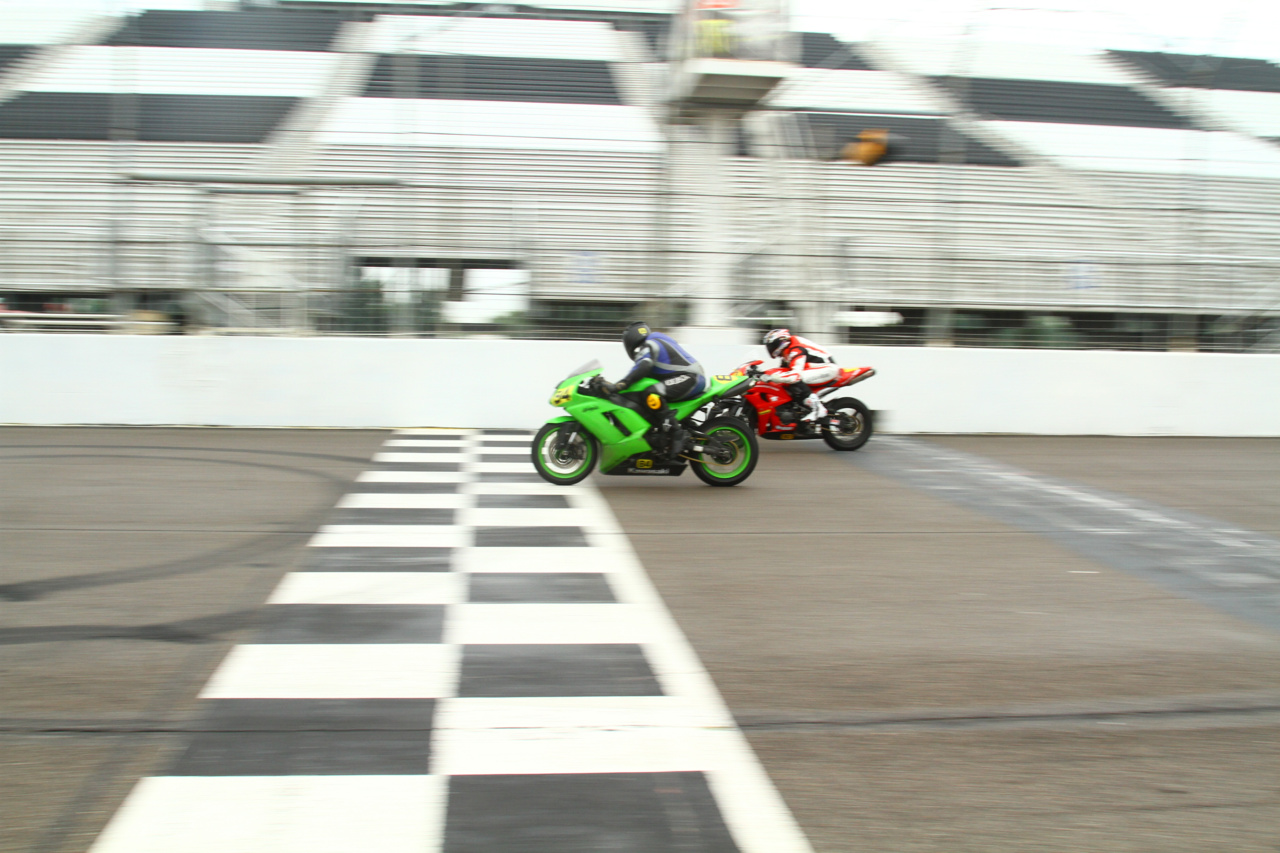 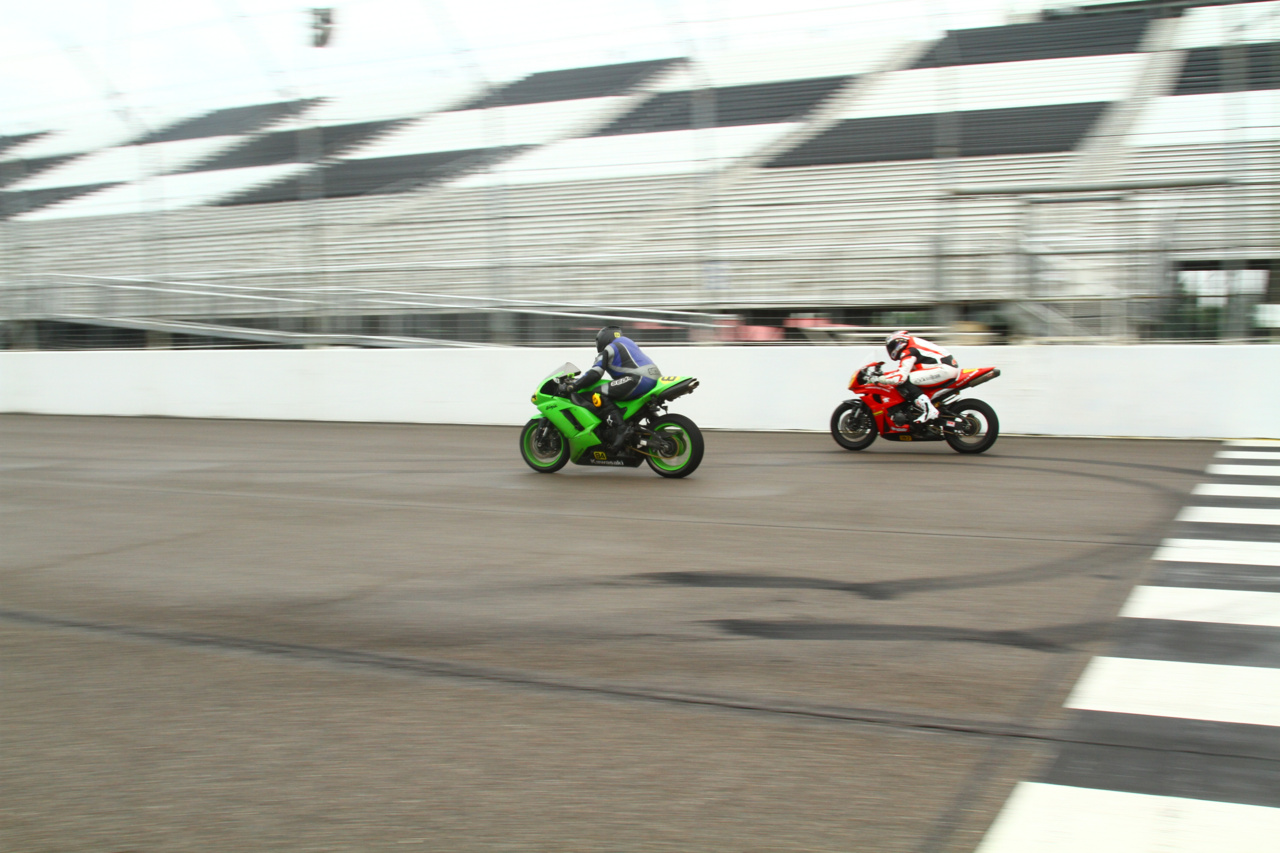 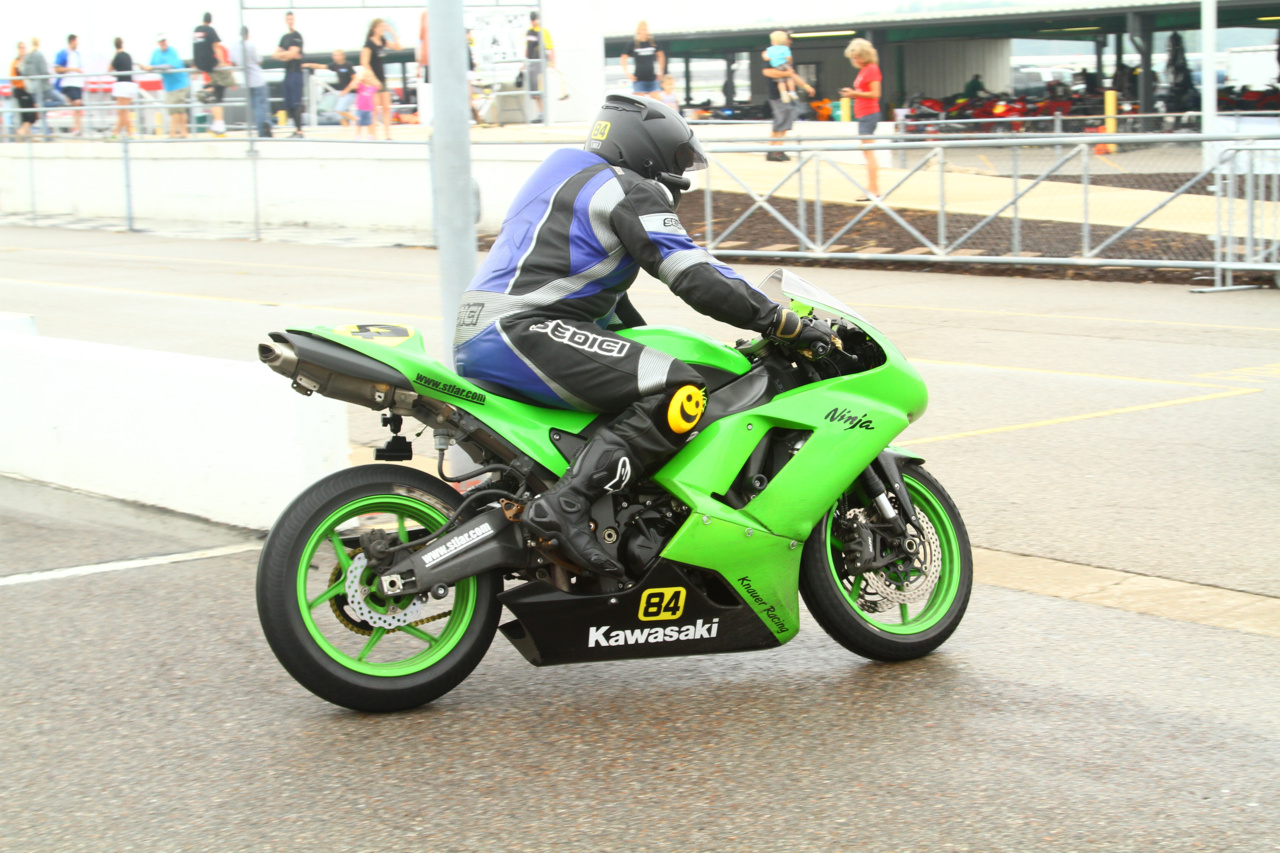 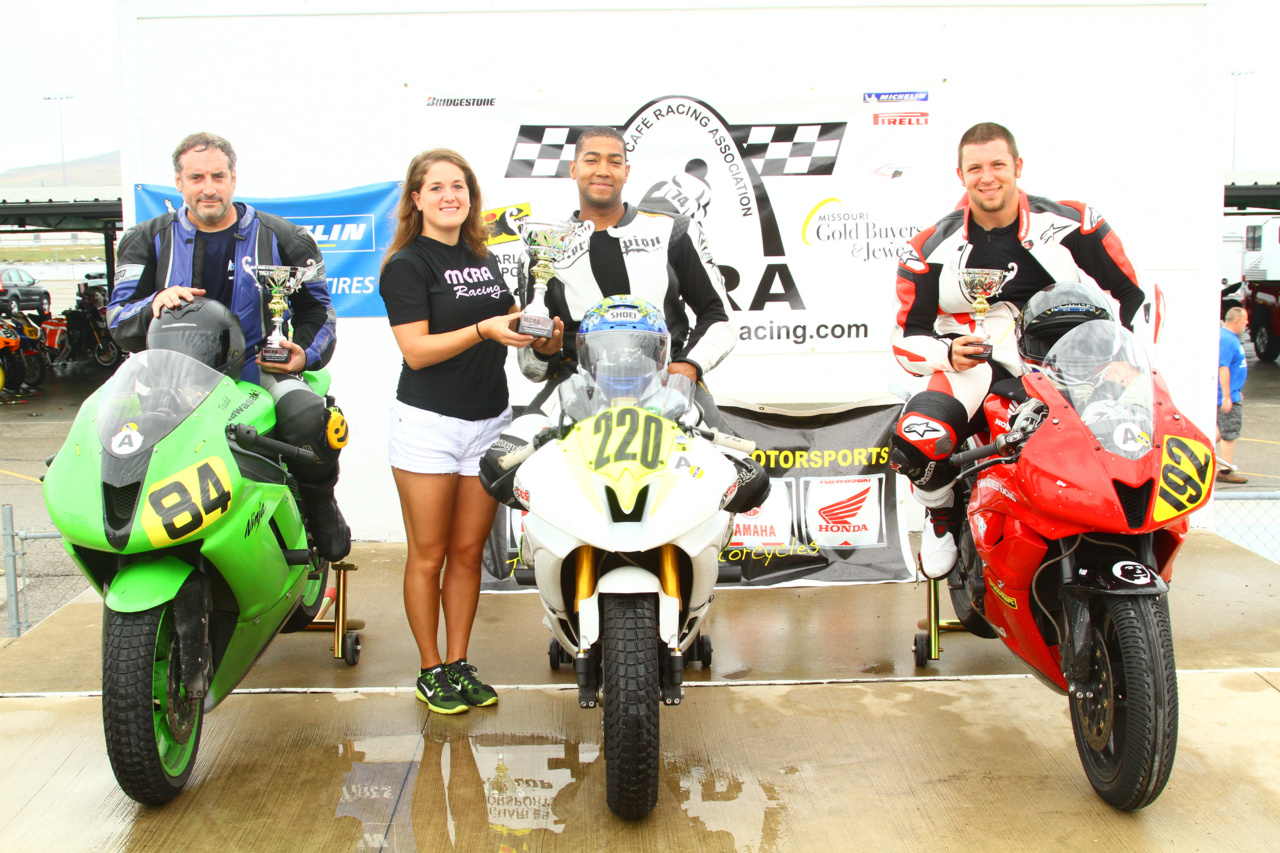 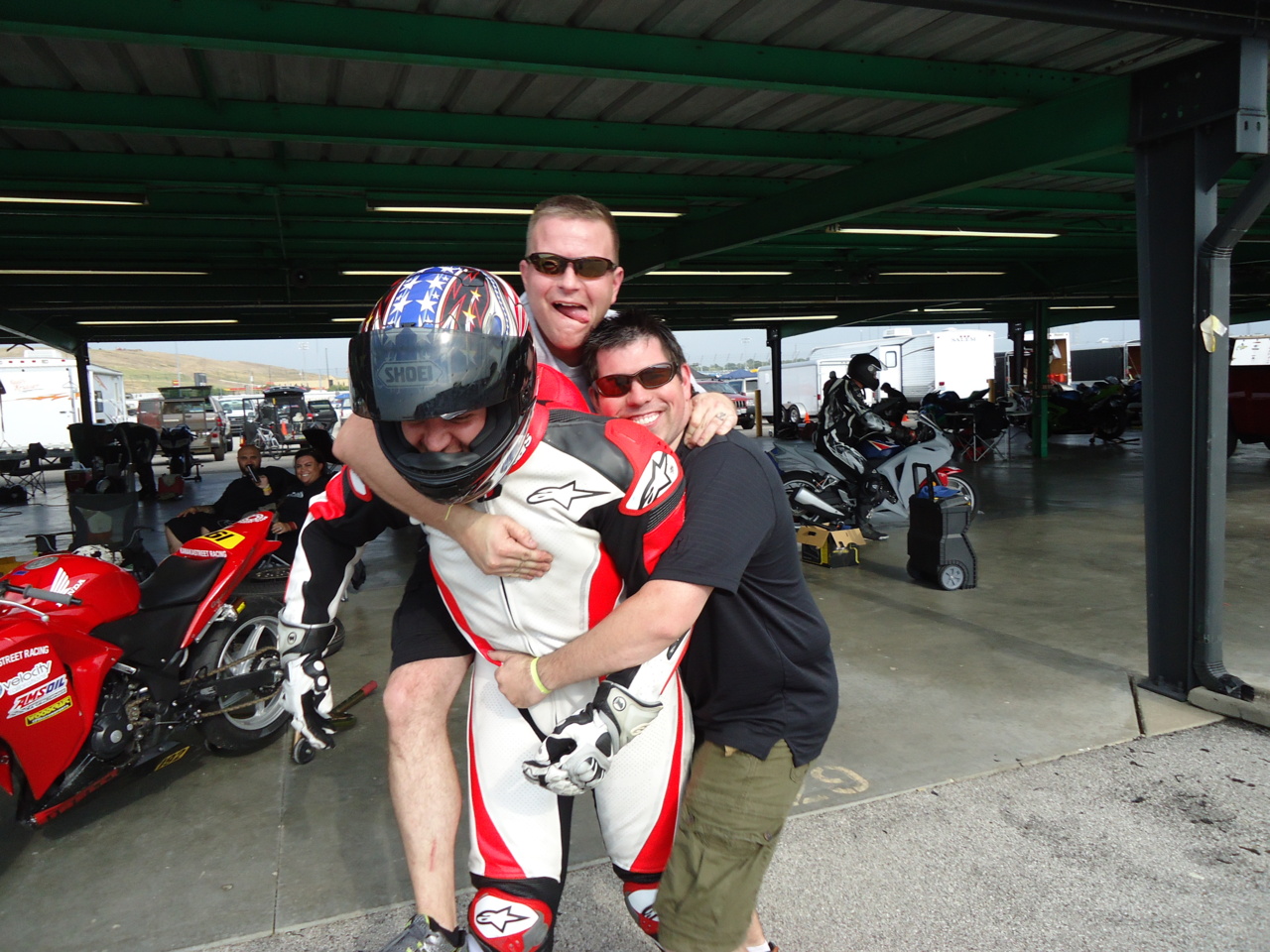 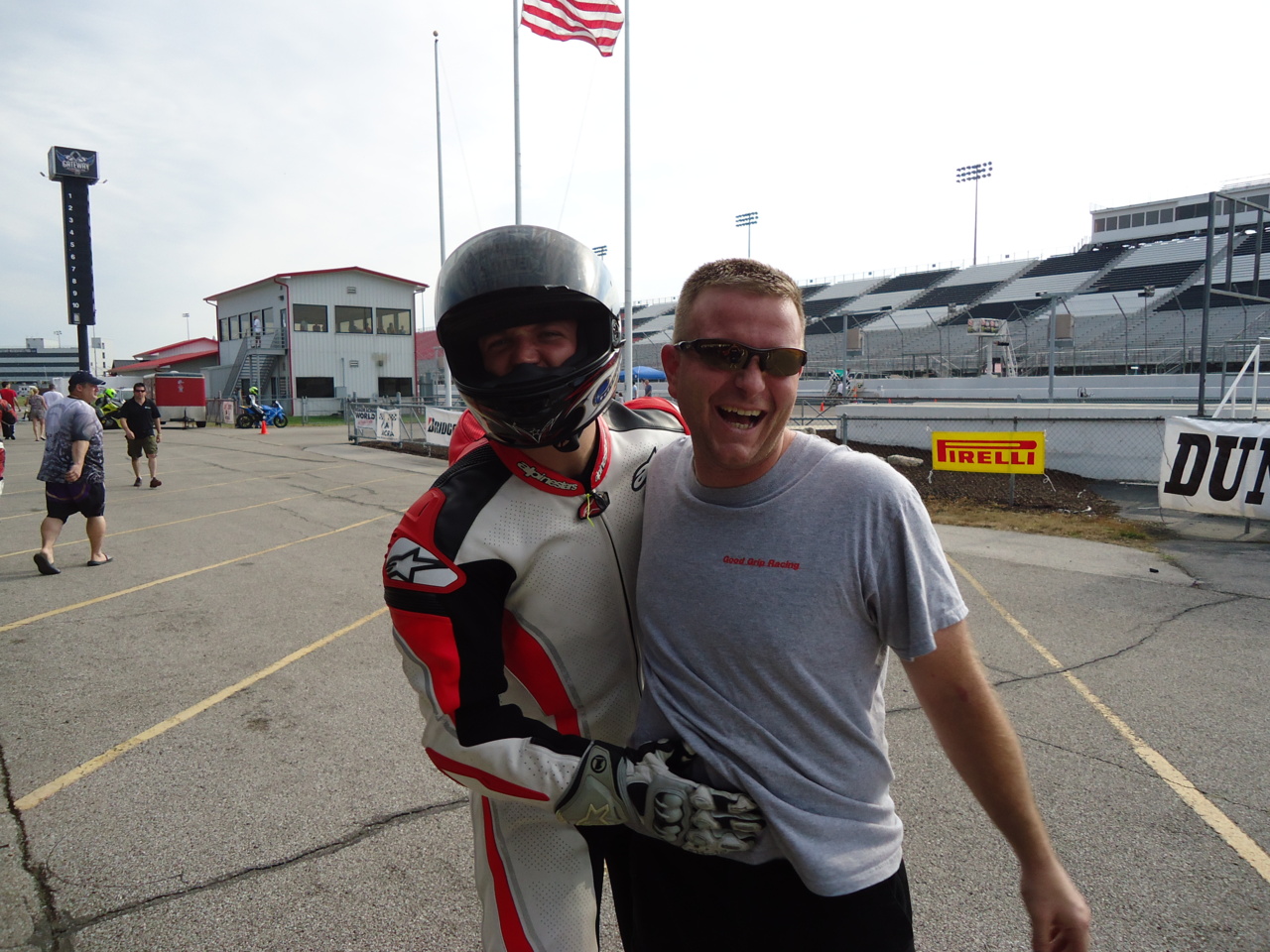